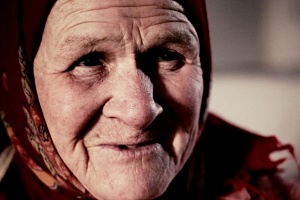 A melancholy portrait of old women in a remote part of Russia, full of life stories and folk songs.

In a remote part of Russia, Anna, Evdokia, Lidia and Elizaveta live in a village that’s becoming increasingly depopulated. The old women talk openly about the harsh times they grew up in, how they had children and got by. Close-ups of their weathered skin, deep wrinkles and wise eyes guide their memories of extreme hunger, married life and the many loved ones they have buried. Meanwhile their hands work, as they have for decades, on autopilot. They card and spin the wool, then process it professionally into all kinds of knitwear. And they sing local folk songs, which they perform in a small theater as a form of interlude. They squabble fondly about the choice of songs. One of them suggests a traditional ode to young men, while another one wonders out loud if they’re not too old to be singing about boys. Images of the vast wintery surroundings offer nostalgic introspection. An altogether melancholy group portrait unfolds of a generation that’s slowly but surely disappearing – and their knowledge, folklore and and handicraft along with it.