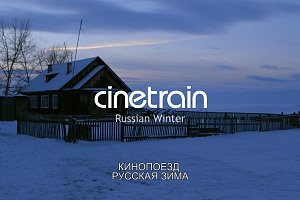 Cinetrain “Russian Winter” welcomes on board several international filmmakers who wish to understand the "mysterious Russian soul" and dispel some stereotypes about Russia.

Cinetrain “Russian Winter” welcomes on board several international filmmakers who wish to understand the "mysterious Russian soul" and dispel some stereotypes about the country.

In January 2013 seven film crews from 14 countries traveled across Russia - from Murmanks to the Lake Baykal - with a few stop-overs in Saint-Peterburg, Kotlas and Tomsk. The crews’ members had competed to participate in the project. The teams worked everyday - on and off the train - and by the end of the 4-week trip they produced, shot, and edited six different stories.

Winter, Women (Love.Love. Love), Vodka (The Green Serpent), Bears, The Lada cars and The Russian Soul (Just the way it is) are six parts of the feature-length documentary. Some of the stories received awards at the biggest international film festivals including Sundance Film Festival, Festival del Film Locarno, Internationale Kurzfilmtage Winterthur. The short film “Winter” was nominated for the Best Short at the European Film Awards and screened during the 2013 Best Short Films programme.