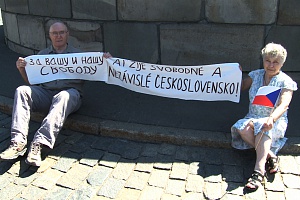 Two generations of protesters and activists meet in this film to talk about what they did and what they will sacrifice for the better future.

On August 25, 1968, a group of seven people gathered on Red Square in Moscow to protest the invasion of Czechoslovakia by Warsaw Pact troops. 5 minutes of Freedom at the main Soviet square cost them years in camps, exile and prison. The authors of the film meet the surviving protagonists of that protest and show the new generation of fighters for democratic rights in present-day Russia. The camera follows young activists of opposition movement, helping to find answer to the question: who are the modern dissidents? And what sacrifices are they willing to make in order to live in a democratic society?