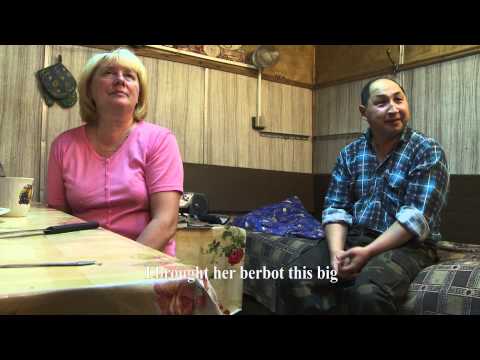 Project about men who to support their families have to leave these families - about shift workers, producing gas on the Yamal Peninsula, Russia

This film tells us three stories about men extracting natural gas in Bovanenkovo on the Yamal Peninsula where the pipeline ​​"Nord Stream" ​starts from​.

There are three heroes – a young ​ assistant driller,  a ​successful boiler room chief engineer, and ​an old plumber. For all of them ​ ​working  for Gazprom is the only opportunity to earn ​real ​money because there are no high paying jobs in their hometowns so they have been forced to leave their families for a long time to be able to support them.

These men do their hard work literally on the ​edge of the world. Winter lasts more than 260 days a year, and even locals (the Nenets people) ​migrate to the south during that time. Frost, snowstorms, strong winds and separation from families... ​They have to decide whether  the money is ​worth all the ​family problems they causes. Each of them make​s his own choice.

About the film director Elena Demidova:
Elena Demidova is Russian film director, scriptwriter and producer. She was born in Russia. She graduated from Moscow State Technical University in 1987 and Voronezh State University (The Faculty of History) in 1997. Director’s education: film school “Internews”, Moscow. Her films are broadcasted on number of TV channels and participate and win awards at many International Film Festivals. Participant of Hot Docs Forum, Leipzig Doc Coproduction Meeting, Baltic Forum, Dragon Forum, and Below Zero Pitching Forum.

As a journalist, published articles and photos at GEO, National Geographic and other magazines. In 2000 founded Ethnogeographic Research Foundation.

Vlad Ketkovich is a member of EDN, International Federation of Journalists, Russian Geographical Society and Eurasian Academy of Television and Radio.


About production company Ethnogeographic Research Foundation; co-production Relation04Media, Norway, Illume Fims, Finland:
Since 2005 Ethnogeographic Research Foundation (Ethnofund) has produced more than 20 documentaries (most of them with Russian State support), that are broadcasted on Russian TV channels. Ethnofund has won a number of prizes and diplomas at different Cinema and Television Film Festivals. Starting from 2010 Ethnofund is looking for foreign partners and works with international co-productions. Company’s ambition is to bring Russian directors and Russian stories to international TV and film market.