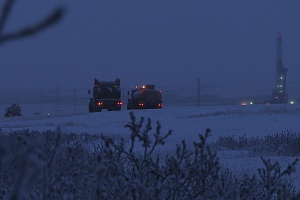 Project about men who to support their families have to leave these families - about shift workers, producing gas on the Yamal Peninsula, Russia.

It is a creative documentary. Through stories of concrete people we will tell about Russian shift-workers, who produce gas. When Europeans switch on gas ovens, they burn gas, produced by our characters. However this is not a film about Russian notorious company Gasprom, it’s a film about men for whom this work is the only possibility to earn decent money. In order to support their families they have to leave their families for a long time.
It’s a hard work on the edge of the earth, on the Arctic Ocean cost. And they could have stayed home, like their neighbors. But neighbors in most of the cases earn a little money and drink a lot. Our characters have made their choice, whether for the good or for the bad. And we are trying to understand them.
It’s a universal story because thousands of people everywhere in the world go for shift work or work in the fields during expeditions. But this is also specific story, because we deal with Russian men in the Russian north, where there are special conditions, and a lot of humor and absurdity, like anywhere in Russia.
We have three characters. First, Dmitry is thirty five. He is young and ambitious engineer, he is interested in his job, he is making good career, earns a lot and keeps decent level for his family. He has beautiful blonde wife and 8 years old son. He buys clothes to his wife, maintains good school for his son, and once in a while takes them across the boarder for common vacation. It seems that this kind of work should fit him fine; otherwise in his hometown he wouldn’t get all these benefits. But his permanent shift schedule breaks the family. He can not take part in bringing up his son, he suspects his wife is not faithful. His wife actually loves Dmitry, but she suffers any time he is gone, is exhausted to be all alone and has difficulties with upbringing their son on her own. We follow Dmitry as his searches answers to this situation and how eventually he decides to quit with the North.
Second character, Alex, is a plumber. He does not pump gas, he pumps feces. His salary is much smaller then Dmitry’s, but he is romantic, he loves north and is accustomed to work in good collective, with rough, serious men. He would never quit this job on his own decision. He had rather typical love story – a cook who came to the north to hunt for a man, took him from his first family. They started to go on shifts together. But one day her contract was not prolonged, and his wife stays home. Alex wants very much to go the north again, but she doesn’t let him go. In the end of the film he fixes toilets in depressive city of Vorkuta, where they have a flat. This is also north, but not tundra. He suffers and dreams of his coming back to real, serious working place.
Our third character, Andrew, is starting to work in the north. Young, inexperienced, he's just began the shift work and everything is new for him – harsh working conditions, strong winds, snowstorms, life in a wagon, complicated relations in a men's pack. At first, when his colleagues talk about work, women or cars during time breaks, he keeps silence – he doesn’t have anything to say. It is for the first time he has left his mother and gone that far. But we slowly observe changes in him – he learns how to work in the north, he fights difficulties, he earns money and buys his first car, he starts to date a girl. Now we see that he has become active, we hear his voice, and only sometimes we still see him being childish. In the final of the film he has to solve serious men’s problems: he leaves his mom’s flat, starts to live separately with his girlfriend, she becomes pregnant, and he has to take care of her and of his mother. We observe that for Andrew the North has become a place, where he has gotten mature, where he has grown up from a boy to adult man. For him this choice was the only right choice, no doubts. These three stories will be interlinked through parallel editing; they will be supporting, explaining and moving each other forward.
Through these characters we are trying to understand, what brings people to the north and what keeps them there, we will also get to know their main problems. How they cope with difficulties? Maybe it would’ve been better to stay home? Does this decision worth losses?

About the film director Elena Demidova:

Elena Demidova is Russian film director, scriptwriter and producer. She was born in Russia. She graduated from Moscow State Technical University in 1987 and Voronezh State University (The Faculty of History) in 1997. Director’s education: film school “Internews”, Moscow. Her films are broadcasted on number of TV channels and participate and win awards at many International Film Festivals. Participant of Hot Docs Forum, Leipzig Doc Coproduction Meeting, Baltic Forum, Dragon Forum, and Below Zero Pitching Forum.


About the Producer Vlad Ketkovich:

Since 2005 Ethnogeographic Research Foundation (Ethnofund) has produced more than 20 documentaries (most of them with Russian State support), that are broadcasted on Russian TV channels. Ethnofund has won a number of prizes and diplomas at different Cinema and Television Film Festivals.
Starting from 2010 Ethnofund is looking for foreign partners and works with international co-productions. Company’s ambition is to bring Russian directors and Russian stories to international TV and film market.