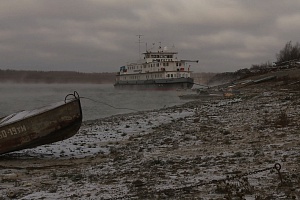 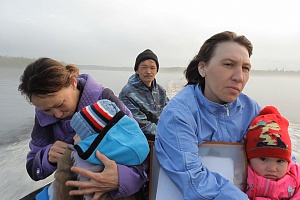 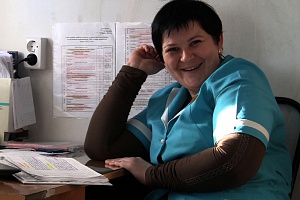 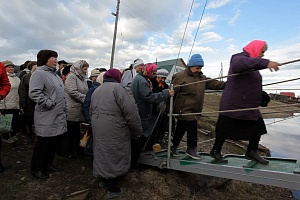 Through half-a-year journey on Siberian floating hospital in the Ob’ river region, we meet people of our country, and get to know them – who they are, what they think about, what are their dreams, and thus start to understand Russia a bit better.

When the Siberian winter releases its grip every year in May, twenty doctors, mostly women, board a special ship - a floating hospital, leaving their families behind. The ship crisscrosses the Siberian North, bringing medical care to the remotest rural outposts. Locals wait for this ship, for them doctors are heralds from the big world. For the doctors, it is an adventure that alters them and that many of them have become addicted to.
Majority of doctors are women who are not married, or divorced. Salaries in normal clinics are rather low and in order to support their kids they need to go on a shift work for half a year – until river gets frozen again. They float to village dwellers, leaving their children and normal life behind.
North of Siberia is a territory with rigid climate, and further to the north you go, the tougher is the situation – impassable taiga, swamps, midges and mosquitoes, winter half a year.  Villages in the area have less luck – there are even no roads to many of them. The only pass is water. Hospitals left from the Soviet times are closed now, doctors are gone. Villages are isolated.
Each village has it’s distinctive face. Sergey Ivanovitch from Aneevo is sure that we all live here due to huge experiment and somebody invisible is watching us and monitoring, if we survive or not. Old man Mikhail Petrovich at his 80th spends half a year at the taiga forest hunting. He also knows lots of medical herbs. He says “All sicknesses can be cured by the frost”. In the village Sartinya there live jolly people – they joke and lough all the time when at the hospital ship. But there is only one child in the village of 40 houses… Saranpaul village hasn’t seen floating hospital for 7 years – rivers are getting shallow, there is no fleet that used to clean rivers. This village is even more isolated from the big world than others. They used to mind crystal here, and now many people from this village have lung diseases.
Sailors have their own problems. Every day water gets lower and they have to maneuver to avoid the shoals. This time Saranpaul had luck for only one day – next day the ship had to escape.
Doctors also have hard times. They live according to schedule, in double cabins, lines of patients every day. Nowhere to go, nowhere to hide. They cannot talk to their families often – mobile net does not exist in many places. Tatjana Petrovna has her grandson born. Nurse Victoria’s small son is forgetting her voice and does not want to talk to her. Each of doctors has his grieves, his problems…
But ship moves on according to its schedule. Mosquitos are changed with hot weather, after hot weather comes rainy season, after white nights comes darkness and snow. Patients, who come early in the morning, stand in the darkness, get cold and joke with each other, and laugh.
“Doctors prohibited me salty and hot food”. –“Are you still allowed to sing?” –“yes, perhaps”.
In every village there is a club and its talents – they sing songs. Sometimes there is a feeling that singing is the only thing that is left to do.
- “Oligarchs are selling our land for billions and billions – one man says to another in the corridor of the hospital”  -“I wouldn’t take this money” – answers companion.
Ship passes ruined river bank with remains of river Station. –It’s been 20 years of Perestroyka, and we still cannot finish it” – says captain gloomily. And he calls to the hospital: we need pillows, simple pillows; we buy them on our own money, it’s no good!
The ship’s route is lit by flames of gas rigs. Boatswain s wears: Map is not correct! Captain is close: - Why do you think dinosaurs died out? It’s just a theory about meteor… Soon the same thing will happen to us…
Finally it’s a huge Khanti-Mansiys, lit with lights. They haven’t seen town for half a year. They pack equipment and drag it up the stairs. Ship now is lonely and abandoned.  Doctors rush to leave it – some with a happy heart, somebody is crying. They hate this place of half-a-year imprisonment, but next spring most of them will be back, this work stays with them, this is their life style, and they actually love it and miss it.

About the film director Tatyana Soboleva:
Tatyana Soboleva was born on 1975 in Moscow. She learned a drama, a psychology, was a student of the Literature University.In 2004 she graduated from All-Russia State Institute of Cinematography (VGIK) where she pursued a degree in Film Directing. Her documentary debut 'FRANCOIS: RESIDENS PERMIT' was a participant more than 20 International festivals, and deserved some awards including «The best documentary» (IFF in Tehran). In succeeding years she made some independent documentaries and films for TV channels. Her films were shown and were awarded on different Film Festivals. In 2011-2013 she participated in different International workshops, like “East European Forum”, “Baltic Sea Forum”, UKUS Refineri, Below Zero, etc. Tatyana Soboleva is a member of Directors Guild, Russia.


About production company Ethnogeographic Research Foundation, Format TV:
Since 2005 Ethnogeographic Research Foundation (Ethnofund) has produced more than 20 documentaries (most of them with Russian State support), that are broadcasted on Russian TV channels. Ethnofund has won a number of prizes and diplomas at different Cinema and Television Film Festivals.
Starting from 2010 Ethnofund is looking for foreign partners and works with international co-productions. Company’s ambition is to bring Russian directors and Russian stories to international TV and film market.