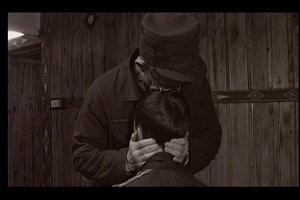 25 years ago they were not executed by firing squad due to Eltsin’s moratorium on death penalty. Instead they got life sentences.  25 years were spent in waiting for the year 2014 and their official right to get a parole. The hope of coming back from the hell helped them survive. Today film characters are going through an agonizing withdrawal. They see that their hope was vain, and they won’t be let out. Their execution goes on.

10 years ago we started to make this film. Three characters who experienced borderline spiritual experience. The main character – Vyacheslav Sharaevskiy – three years in a death ward waiting for execution turned him, formerly region’s Attorney General, sportsman, atheist, into a true and strong religious believer. Vladimir Ganin, who has never painted before, became an interesting artist. Vladimir Podbutskiy keeps getting married. One more character is Jimmy Boyle from Great Britain, a famous Scottish former life sentenced prisoner. A psychologist and a sculptor worked with him during his time in prison. Now Jimmy Boyle is a world-famous sculptor, a rich and successful person. Though he was only released due to pressure from English public.

About the film director Irina Vasilyeva:


About the Producer Alexander Radov:

As a General Producer of “Fishka-Film” Studio, Alexander Radov is one of the leading makers of independent documentary in contemporary Russia. His studio produces over 40 full-length documentary films and TV-programs annually. Over 20 years he produced several dozens of documentary cycles and series (over 500 films and TV-programs), in particular – “Historical investigations,” “Kremlin: history in diseases,” “Adventurers of 20th century,” “Podvorye” (Courtyard), “Seduced by the country of Soviets,” “Seeking teacher,” “Boris Messerer,” “Monologue of a Free Artist” and others.  For over 10 years he has produced series “More than love” at TV “Kultura.”