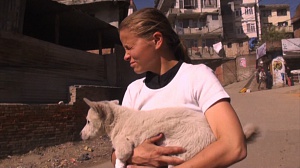 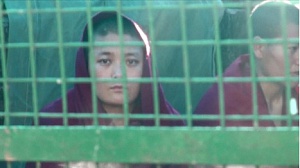 This is a road movie about one Russian girl, who left everything and moved to India. She has nothing except small bag and tragic story behind. She travels alone around India in searching for the purpose of leaving. But her past always follows her. Who knows weather she will be able to become free of it?

She was a beggar, lived with ten dogs and crazy Mum in a small room in slums of Moscow.

One day she run away. Her mother died alone… Then were drugs, prostitution and rock-and-roll.

Her first husband was a drug dialer and was put into a jail, and she run away again.

Then she fell in love and become pregnant but her new boyfriend didn't want to have a family and she run away once more... now to India.

She becomes a buddhist, helps homeless dogs and people. But she still doesn't know where to go and how to live, and the main question for what reason?

She travels alone around India in searching for the purpose of leaving. But her past always follows her. Who knows weather she will be able to become free of it?

There is no stillness in her world. Everуthing is moving. But where and why we don't know.

This is a road movie about one Russian girl, but in general the idea can be defined in such words as eternal flow of life, where Kate's life is just a blink, but in this blink the whole eternity is reflected.

From 2012 to 2013 Anna participated in exchanging program between VGIK (All-Russian State University of Cinematography) and SADA (Stockholm Academy of Dramatic Arts, Sweden).

She worked as a documentary director on the Ostrov Studio, studio Nashe Kino, studio Center of National Film.

Festival "Message to Man" - award for the best student film

Festival "Let us live" - 1st place for the documentary

Film «On the Edge»

Films «Pacific Ocean» and «Katia» were shown on TV channels «Culture» and «24 DOC».