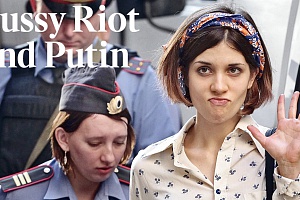 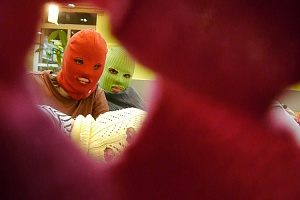 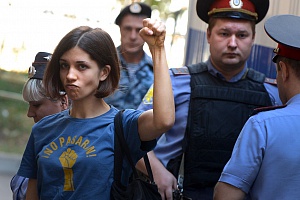 In 2012, two members of the wild and anarchistic female band Pussy Riot were sentenced to two years in a Mordovian labor camp for "hooliganism motivated by religious hatred," in the words of the prosecution.

The Russian film collective Gogol’s Wives follow each step of the feminist punk band’s battle against Putin, including their first disruptive performances on a trolley bus wearing brightly colored balaclavas (emblazoned with the motto "Kill a Sexist"), scenes of them shooting their video about transparent elections, their controversial performance in the cathedral on Red Square, and footage shot from behind bars. They get support from many corners, including Madonna, who painted the words "Pussy Riot" on her back and wore a balaclava during her Moscow show. And a man on the street finds many allies when he loudly decries what he describes as an "inquisition." In scenes such as these, the documentary portrays the grim state of present-day Russia, a divided country where conservatism and anarchy stand in stark opposition to one another. Pussy Riot believes that art has to be free, and they're willing to take it to extremes. "Pussycat made a mess in the house," they say, and the house is Russia. The filmmakers were not seeking to moralize through their observations of the debris. They simply edited the events together, and it’s up to the viewer to draw a conclusion.
﻿