Holocaust: is that a wallpaper paste? 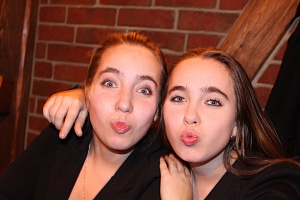 The Karatygin sisters woke up famous after the TV show “The Utterly Stunning” where they were asked a question what is Holocaust. Two girls replied that it was a wallpaper paste. Russian Internet went viral.

The Karatygin sisters received what all the other young people dream about – become famous in Russia. This is why they came to participate in a MUZ-TV programme “The Utterly Stunning”. This show usually does not cover topics one would have during exams, and unexpectedly the girls were asked what the word “Holocaust” meant. The girls replied that it was some paste for wall paper. This episode of the show received an enormous number of clicks on YouTube and raised a lot of questions about the Russian education and about the girls themselves. Meeting with the Karatygin girls inspired an idea: arrange a trip for them to Auschwitz in Poland, show them and tell them about the place where one of the most horrific tragedies of the 20th century took place.
﻿