The Key to the Clockwork Orange 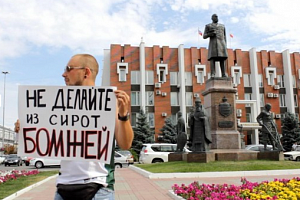 The film is devoted to the struggle between Russian Neonazi and Antifa. In the spotlight are the origins of this conflict at as well as the personal destinies of the leaders of youth groups who continue their war on the entire territory of Russia.

The confrontation between FA and AFA started in the early 2000s. It was a reaction to the appearance of skinheads-nationalists practicing the cult of the Third Reich and aggressively cracking down the undesirable people in Moscow and then in other Russian cities.

In response, there was formed ANTIFA, the movement which tried to resist the domination of Nazi-skinheads in Russian streets. Its consisted of the young people which sometimes looked like right-wing skinheads and sometimes coming out of their environment. During this youth street war of 2000s dozens of young people were killed, hundreds were set to prison and thousands got injured.

Our protagonists are: Moscow antifascist Alexei Sutuga (SOCRATES), one of the leaders of Russian ANTIFA, Oleg Petrov (BUBBLE), the representative of Saratov antifascist movement who was a football fan and became one of the ideologists the Anarchist party "The Independent Action”, Dmitry Semkin (MAMAY), the former "central" of Penza Nazi-skinheads, now moved to Moscow and enjoying the authority of the young generation of Russian National Socialists, and Sergey Vilkov (FUCKER), a former punk and deserved street fighter known for his fearlessness, now a political journalist and one of the ideologists of the movement ANTIFA.War between FA and ANTIFA had no strategy aims or the single command.

It was a subculture war the main front of which was music. This war was led by very similar young people who didn’t fit into the social structure of contemporary Russian society. Nowadays, when young people grew up, and the Russian government has conducted a campaign of repressions against both sides, the activity of street confrontation almost came to naught, but the fire didn’t extinguished, it went underground but still proliferating and spreading to new social strata. And what’s important, the matured young people discovered new perspectives and new confrontation means of struggle.The leaders of the street gangs are watching the policy with great interest.

They begin to try themselves a new career and “adult” political life with the rich baggage of "military" experience. They are more than demand there. "A Clockwork Orange" by Anthony Burgess and Stanley Kubrick gets new key impression. However, the development of the political career is only perspective for now. In the short period of time between reckless youth and serious life the main feeling of our characters is nostalgia. That nostalgia is an emotional tuning fork of the present day and our film.

About the film director Olga Yakovleva:

Director of several documentaries which took part and were awarded at Russian and international film festivals. Participant of several creative workshops in Russia and Europe. Now Olga works as an independent filmmaker and as a manager of international program of “Saratov Sufferings”, International Documentary Drama Film Festival.