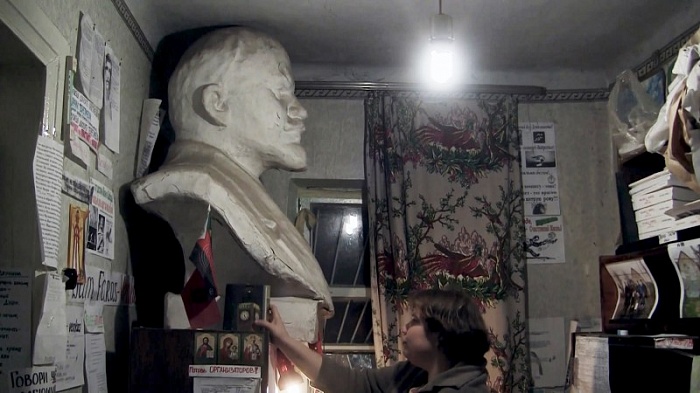 This documentary focuses on S.P.A.R.T.A., a “poetic agricultural commune” dwelling in the East Ukrainian village of Caravan. In the early 1990s, the founder of the commune developed his own “Theory of happiness,” which the members have painstakingly followed for the past 20 years. In this system, happiness comes at a price: all commune members must accept a strict hierarchical system, do their share of hard physical work, and develop their spirit through obligatory poetry-writing. Convinced of the world’s ongoing degeneration, the “Spartans” live according to war-time laws. The commune has its own hymn, flag, and legal code, drawing strongly on Soviet vocabulary and symbols. The lower ranks report directly to senior ranks without demur. These laws forbid sexual relations, smoking, cursing, alcohol, and drugs. We are introduced to the inner workings of the collective through the eyes of a young idealist, Sasha, who spent a year in the commune but finally decided to leave. Will she be able to quit this close-knit community which considers departure a betrayal?

In the USSR, the cult of Lenin had replaced the Orthodox religion that Communists wanted to eliminate. At the end of Soviet era, in the village of Gorky, 20 kilometres from Moscow, the last and the most ambitious Museum of Lenin was built. In its former days it had 3000 visitors per week; now it’s only 20. Today it looks like a temple from some forgotten civilization, a place that has fallen out of time. But faithful to the ideas of Lenin, the keepers of the museum remain. They wait for sporadic visitors in the abandoned halls—and for the return of former times. In this documentary, the story of the museum is shown through the two main characters, Evgenia and Natalya, the caretakers of the museum. Natalya is 52 years old, a history teacher at the local school who is devoted to the museum and the communist ideology. 56 year-old Evgenia is a new-age believer; she worships all sorts of gods and considers Lenin one of the biggest among them. But after 10 years of dedicated work in the museum, she now wants to leave to continue her spiritual journey in another place.

Followed by a discussion with:
Askold Kurov, born 1974 in Uzbekistan, is a film director, cinematographer and film producer who lives in Russia since 1991. He studied Philology, Theatre Science and Theology. In 2010 he graduated from Moscow’s Marina Razbezkina Film School.
Izabela Kalinowska-Blackwood is Associate Professor of Comparative Slavic Studies. Her Research interests include Polish and Soviet/Russian cinemas, gendered notions of identity, nationalism, and colonial and post-colonial studies.
Oksana Sarkisova is Associate Research Fellow at the Open Society Archive and the Department of Legal Studies, Central European University, Budapest. Since 2004 she is Program Director of the annual Verzio International Documentary Human Rights Film Festival in Budapest.
Timothy Snyder is the Bird White Housum Professor of History at Yale University and Permanent Fellow of the Institute for Human Sciences. His most recent book is Bloodlands: Europe between Hitler and Stalin.