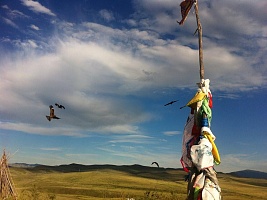 35 international projects in development were presented to around 70 potential co-financiers: other producers, funds, broadcasters, sales agents and distributors and other organizations who support the production of author-driven creative documentaries over two days of individual meetings.

Producers of the 35 projects also could meet each other in this framework, with the hope of fostering international co-production. Organizers of the event believe creative producers to be the backbone of the non-fiction audiovisual industry and want to encourage a lively and vibrant network of international exchange partners.

"Nemtsov" is the story of the slain Russia opposition leader Boris Nemtsov: his life and times, and tragic death, coupled with an investigation into who killed him, and what has happened to Russia since he was murdered within a stone’s throw of the Moscow Kremlin in February 2015.

"Shamanic Lessons for Beginners" is a film about shamanism in the modern world. One chracter is a westerner who wants to become a shaman. His friend is an Asian and he wants to improve his shamanic skills in order to make a better living. They are very different, but they have the same goal. Authors will follow their physical and spiritual journey.

The producer of the film "Shamanic Lessons for Beginners" Vladislav Ketkovich explained to RGDoc.Ru how important it is to take part in the co-production events with documentary projects: "The fact that the film "Shamanic Lessons for Beginners" was selected for the DOK Leipzig Co-Production Meeting, confirms that foreign partners are interested in the project. Before Leipzig, this project was pitched at Edinburg Pitch in July 2015. We were introduced to the jury made up of comissioning editors and festival selectors from Germany, Holland, the UK, the US and some other countries, got a good feed-back. Now, in Leipzig, we plan to strengthen working relations that have arisen in Edinburgh and find foreign partners – co-producers. Leipzig is a large industrial area with excellent opportunities for professional networking."