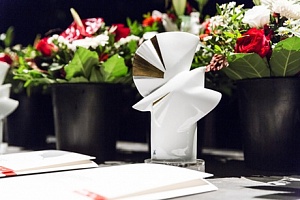 The jury marked the film for "creating a compelling portrait sensibly conveying the feeling of loneliness approaching at the end of one’s life".

The film "The Conversation" is the story of Valentin Stepanovich, the last inhabitant of an abandoned village. Somewhere in a lonely landscape, in a humble cabin, an old man sits at the window. A mobile phone is on the table, he’s waiting for a call. In the meantime he talks to himself, since his wife is far away, in hospital. A spider weaves its web on the ceiling, a water kettle simmers, time passes. A composition of exquisite moments of melancholy: a lament for the absent wife and at the same time an ode to being together.

Denis Klebleev got the honorary mention in the Next Masters competition for the film "Strange particles" ("Strannye chasticy") with the formulation "for a film which empathetically and vividly portrays how difficult it can sometimes be to communicate with each other, and how we can inhabit entirely different mental spaces while sharing the same physical space".

The film is about Konstantin, an introverted young scientist, who is tasked with familiarising the adolescents in a summer camp with physics. Konstantin’s thoughts perpetually revolve around quantum theory. He is obsessed with the idea of being able to explain the world by it somehow. All the more frustrating for him when he gradually finds out that the adolescents in the camp refuse to share his passion. Isolation drives him into a corner. The narrative space gets smaller, too, and Konstantin’s thoughtful and nervous face begins to dominate the screen. “Strange Particles” is a portrait that also stands for the suffering of everybody who believes: strongly, sometimes in something unexplainable that can’t be proved. An existential question.

International Leipzig Festival For Documentary And Animated Film "DOK Leipzig" was held this year from October 26 to November 1.
Share page